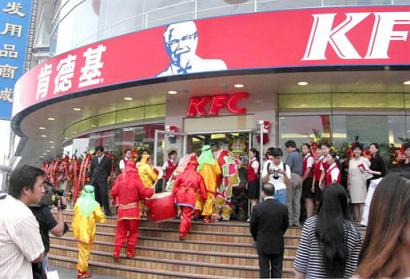 
The fast-food industry is a multi-billion dollar global industry, and one of the largest in the world, with multiple and diverse players. Most of the strongest brands are American, and despite short-term ups-and-downs, the greater expansion pace doesn’t show signs of abating.

The hottest regions are the emerging economies (such as China), being fought over by competitors such as Kentucky Fried Chicken, Wendy’s, Pizza Hut, and of course McDonald’s, which leads the industry in sales, profitability, number of retail stores and overall brand recognition. Most of these competitors are highly vertically-integrated franchises with very strong integrated operations and strategic planning systems.

In many countries these establishments are perceived as quintessentially representative of “American culture”, and this is both a boon and a danger for fast-food outlets. The attraction of American culture is a strong lure, and good for business; but today special interest groups such as Greenpeace, PETA, Muslim fundamentalists and other protectionists are increasingly active in boycotting and otherwise damaging outlets’ businesses.

Kentucky Fried Chicken (Japan) Limited (KFC-J) was started as a joint venture (JV) in early 1970 between JV initiator Mitsubishi, who wanted to develop domestic demand for its poultry operation, and Kentucky Fried Chicken (KFC). Harland (Colonel) Sanders had franchised in 1956 a fried chicken recipe that was so successful, he sold some 700 franchises in 9 years. KFC was bought by John Y. Brown and Jack Massey for $2 million from the 74-yr. old founder in 1964, and in the next 5 yrs. KFC revenue grew from $7 million to $200 million. In 1970 KFC was building 1,000 stores a year in the U.S. However, the rapid growth caused a big problem: management turnover, and by the late-1970’s the U.S. economy slipping into a recession caused the stock to fall from $58 to $18. The management exodus continued.

Compounding matters, a fast food industry shakeout began, and franchisees suffered under the lack of higher management support and guidance, the recession, and strong competition. Low morale affected customer service and product quality, and management was too preoccupied with its own internal disagreements to pay much attention to international operations. In mid-1971 Brown and Massey sold KFC in a stock swap to Heublein, Inc., a packaged goods company with well-branded franchises such as Smirnoff Vodka.

KFC’s small international staff was folded into Heublein’s international group, which struggled to control the independently-minded foreign subsidiaries. Meanwhile, KFC-J under Loy Weston and Shin Ohkawara went ahead with their own development plans, including menu adjustments; and thinking of KFC-J as a fashion business, focusing marketing on upscale young couples and children, which helped KFC-J to thrive. By the end of 1972, 14 new stores mainly in Tokyo opened, and in 1973 50 more were added. 1974 was slated to be KFC-J’s first profitable year, but the oil crisis hit Japan, and losses began, causing refinancing and store expansion slowdown.

In 1975, Michael Miles was appointed VP-Int’l Operations for Heublein, and strategic planning was his credo. He focused his attention on KFC’s international operations, and implemented a strong strategic planning system, which took about 2 years for subsidiaries to gradually adopt. KFC-J, however, was resistant and adopted what it could to Japanese practices, and went along with the new system reluctantly. In 1976, KFC-J made its first profit, 14 million yen, a modest amount.

In the early 1980’s KFC headquarters reorganized under pressures of domestic operations doing poorly, which was significant as it accounted for 2/3 of KFC’s global sales. Churches and other aggressive new competitors appeared. Miles focused upon a “back-to-basics program” of quality, service, and cleanliness systems (QSC); and by 1979 profits rebounded, bringing KFC closer to McDonald’s profit levels.

As international operations slowly improved, giving KFC strong sales growth and profitability, R.J. Reynolds (RJR) acquired the company in October 1982 as part of its diversifying away from tobacco products. KFC then came under the control of Richard Mayer, who also held strong convictions about the values of strategic planning. Although KFC-J was KFC’s largest, fastest-growing, and highest-potential international subsidiary, by late 1983, KFC-J was opening its 400th store, by on a per-capita basis this represented less than 25% the level of penetration in the U.S.

The entry barriers to the fast-food industry are relatively high if there is only one outlet – the savings increase exponentially when the number of outlets increase, and product quality and supply is controlled. For KFC-J, supply was easier through it’s powerful Joint Venture partner, Mitsubishi, which provided poultry and other supplies. Additionally, as it had in early 1970’s, Mitsubishi was also a funding source. So, a new fast-food entrant has better chances of surviving if it has a parent or partner or some other funding source with which it can set up strong strategic planning and operations systems, particularly in Japan.

Market conditions are another consideration, as burger-type of chains are dominated by McDonald’s, Burger King, and Wendy’s. For KFC, Popeye’s is its biggest challenger. The nature of the fast-food industry is about price, convenience, taste, and environment. Brand comfort is certainly a consideration, but locale and price dominate. Chains which can physically dominate good locations and have alternative menus such as “Dollar Menus” or foods preferred by local tastes do best. Buyers can easily switch if competitors are physically located closely to each other, so quality control is an additional concern. It is more profitable to retain an existing customer than to acquire a new one.

KFC’s management of its international operations has improved dramatically over the last 3 decades. Implementing strategic planning and operational controls is critical, and although more entrepreneurial spirits consider the reporting and other controls stifling, in a organization the size of KFC’s, controls are imperative. Consistency of product, including its environment, are key to brand recognition and drawing traffic. Good management knowledge of outlets’ activities is invaluable to decision-making, including how much of what kind of support to provide. McDonald’s “owns” its suppliers in the sense that its control over product quality is total and huge in dollars. For KFC-J, having Mitsubishi as a solid, agreed upon JV partner could not be a better fit in solidifying against Porter’s concerns of Supplier and Substitutes control, Buyer control, and resistance to New Entrants.

The nature of the Japanese market was also condusive to KFC-J’s success, as the involvement of the Japanese government is critical to success in Japan. Other competitors seeking entry to Japan would need a similarly strongly positioned partner the caliber of Mitsubishi or some other sogo sosha.

Dick Mayer should consider carefully where to move Loy Weston. Weston has been with KFC-J for a long time, and despite his success in Japan, in the 4 years since he’d taken on the VP-North Pacific position, progress had been slow. Shin Ohkawara was doing fine running KFC-J, but Korea, Taiwan, Thailand, and Hong Kong needed not just an entrepreneurial spirit, but also a strong strategic mind with an taste for detail. Mayer should examine the reasons why KFC-J was successful, and determine how much both Weston and Ohkawara actually contributed. Perhaps in actuality he might have ridden on Ohkawara’s strengths, or Mitsubishi’s strengths, or lucky market conditions, or some combination. If he really did have a workable system, at least some parts of it should be transferable to success in Korea, Taiwan, Thailand, and Hong Kong (KTTHK).

Assuming that KFC-International is still regionally based, Mayer at HQ could:
- have KFC-HQ create another position to put Weston in,
- OR put him back as KFC-J head,
- and in either case promote Ohkawara to VP-North Pacific.

Before that, Mayer could first give Weston stricter performance achievables within a reasonable timeframe, as determined by market studies. In the meantime, Mayer could have Ohkawara evaluated to see if he might have a greater chance at making KTTHK successful. It’s important to retain experienced management, and Mayer should figure out a politically expedient plan to retain both men, being particularly gentle with Weston. Weston, having been a white man heading up a large American enterprise in Japan for a long time and advancing in age, may be delicate to handle.

KFC-J, with its Mitsubishi partner, is strongly positioned in Japan, and growth can continue. Any new entrants should be watched for, but more attention should be paid to KTTHK.

KTTHK are different markets, but all are economic tigers with market segments which KFC would appeal to more from a brand perspective (fashion) than a price perspective (fast food isn’t always the cheapest source of food in overseas markets). Certain people in these markets might potentially resent a Japanese head (Ohkawara) of an American chain coming into the market, given the countries’ histories with Japan, so from a political standpoint having Mayer continue for a year or two longer might be better from a PR standpoint. Also, as he’s been with KFC for so long with a good track record, despite his shortcomings he’s still a valuable manager to retain. Mayer might find more politically comfortable ways to communicate the need for KTTHK to show results, perhaps spend some time personally with Weston in these countries and developing a strategic plan in tandem so that Weston feels he is involved with the new plan. Having management’s buy-in in critical to the successful implementation of a strategy.

Additionally, significant location scouting is important for Seoul, Taipei/Kaoshung, Bangkok, and HK Island/Kowloon, as fast-food’s primary marketing (product, price, PLACE, promotion) need is a high traffic, fashionable shopping area with lots of young buyers. Maybe Mayer could go on a few location scouts with Weston. All four of these urban markets have a rich supply of new repeat customers, in addition to tourist dollars. Location is key to KFC’s expansion in these areas, with specific studies to students’ and young office/retail workers’ traffic patterns. Appealing to their tastes is less important than location in a “hot” area, as these markets are all intent on emulating “American” culture.

I’d like to see KFC and all other fast food establishments make nutritional information available to customers. In the years that I and my family have traveled in these Asian countries, we have seen a shockingly obvious, rapid deterioration of young peoples’ health (overweight, acne). Taiwan and Hong Kong are particularly education-oriented, so one generally finds these establishments filled with students who munch on fast food while studying their copious homework. Business profitability is good, responsible business and profitability is better.