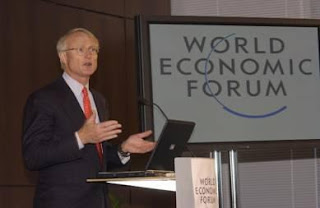 Prof. Michael Porter (Harvard) states that "companies achieve competitive advantage through acts of innovation." How does "innovation" fit within the process of strategic decision-making? How different is the process of a sovereign state achieving national competitiveness from that of a single firm or industry?

In corporations as in individuals, continual growth is key to success in life. “If it ain’t broke, leave it be” is philosophy difficult to sustain for our era of global corporations. Porter’s perspective rings true. I do believe technology’s effects and the involvement of an ever increasing number of nations in the global economy make constant innovation and change a requirement for global corporate survival.

But there are other areas of innovation too – such as internal process innovations – which can lend competitive advantage. For example, in cases of M&A, the inevitable reorganization of internal operations often give entrenched “ways of doing things” a fresh airing, sometimes adding to competitive advantage. Here’s a case where it does so: A multinational financial institution recently undergoing post-M&A reorganization has created a new way of approaching security which is giving them a significant competitive advantage. Previous to the 9-11 Attack and the merger, the Security Divison and the IT Divisions seldom spoke with each other, much less worked with each other. Security was long perceived as an operational expense only. After the trauma of 9-11 and M&A layoffs, a consultant advised this institution that there is a need to address the corporation’s security from a holistic vision, whereby Security and IT would work together to decrease costs incurred by dishonest or disgruntled employees. This is a new operational approach which will decrease the financial institution’s operational expenses. In addition, this internal innovation in conducting business will also contribute to insurance rates reductions, further saving the institution money.

In Porter’s Five-Forces Model, "innovation" is a critical element within the process of strategic decision-making. Innovation can be, as Porter observed, “mundane and incremental”, and it can be in the realms of technology or in the ways of doing things. This leaves a lot of room for good ideas from managers involved in strategic decision-making. Any changes or improvements in these areas can lend the corporation competitive advantage.

For example, military strategy can be applied to address two of Porter’s Forces: Intensity of Rivalry Among Industry Competitors, and Barriers to Entry – If two competitors in the same industry focus upon different niches, and one discovers a low barrier to entry of the other firm’s core business, it can erode that competitor’s competitive advantage in many ways… Physical presence alone in retail outlets can significantly affect brand perception. The attacked competitor can counterattack by using a “multipoint strategy” – counterattacking in related areas of business with similarly low barriers to entry. Cosmetic companies are a prime example of this, and utilizing a multipoint product strategy to gain shelf space and brand positioning is easily seen in any drugstore.

For other industries such as aerospace or biotechnology or software, innovation is the integral core of companies’ R&D efforts, without which they rapidly lose their competitiveness. Their strategy must wholly include factors such as needs and costs of physical facilities, acquisition of new talent, and the development or acquisition of patented technologies. At a very high level of barriers to entry, the entrenched become even more highly competitive as the buyers of their products are not the mass market, and limited in numbers. This sometimes gives the buyer some leverage to negotiate for particular specifications, especially if there is intense rivalry amongst the few suppliers.

When the question is enlarged to examine the process of achieving national competitiveness of a sovereign state as opposed to a firm or industry, it becomes much more difficult to quantify. How to go about improving national competitiveness must first start with what to measure, and how. Porter examines various traditional measures: macroeconomic variables of exchange rates, interest rates, government deficit levels; or abundant inexpensive labor; or ample natural resources; or government policy developments; or balance of trade; or management practices. He also asks, just what is it we’re trying to measure? What is “competitiveness”? No nation has companies dominating every industry in the world.

Porter settles on “productivity” as the most meaningful concept of competitiveness at the national level. The process of increasing productivity in a nation versus a firm or an industry is tied to the strength of its industries, and the health of its companies within those leading industries. There is a symbiotic relationship between the nation and its companies. The improvement of a nation’s productivity (and hence its competitive advantages) lies in, according to Porter, four broad attributes of a nation: Factor Conditions; Demand Conditions; Related and Supporting Industries; Firm Strategy, Structure, and Rivalry. These determinants create the national environment in which companies can become strong and competitive. Companies can then return the benefits to the nation by feeding the nation’s collective productivity, and thereby its national competitiveness. The process then must include: ample resources (including skills) for particular industries chosen; good data on markets and other information necessary for solid strategic decisions; harmonious company and owner goals to the development of the industry and the nation; investment in R&D. Standard economic considerations of labor, land, natural resources, flow of capital, must thus be expanded. In today’s knowledge-based economy, domestic demand is important, but even more important are sustained and significant investments in specialized human skills as well as science/ engineering are key for future growth. (We must watch our recent tendencies to “import” intellectual capital – much of this brainpower returns to their motherlands, creating brain-drain.)